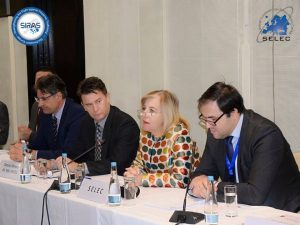 In the framework of project SIRAS – Strengthening the fight against firearms trafficking in Southeastern Europe, SELEC organized during 13-14 November 2018 in Sarajevo/Bosnia and Herzegovina, a regional workshop aiming at exploring various aspects related to the control and deactivation of firearms.

Opening remarks were addressed by Mrs. Snejana MALEEVA, Director General of SELEC, who underlined the particular relevance of the topic for the region and the fact that it requires coordination, complementarity and synergy of efforts. Mr. Mijo KREŠIĆ, Deputy Minister of Security of Bosnia and Herzegovina, addressed the audience, expressing appreciation towards SELEC’s activity, presented the actions taken by Bosnia and Herzegovina in order to strengthen the control of small and light weapons.

The workshop was moderated by Mr. Robert PATRANCUS, SELEC Criminal Analyst, who underlined the importance of understanding and assessing all the aspects (legal, procedural, technical, etc.) of the control and deactivation of firearms, in order for the law enforcement agencies to be prepared to face any challenge.

Experts in tackling firearms trafficking from the National Police forces and from the national authorities in charge of deactivating firearms from SELEC Member States, as well as by other relevant professionals from partner countries and organizations such as Germany, Italy, the Nordic Countries, Spain, the United Kingdom, EUBAM, EUFOR, The HALO Trust, OSCE and Small Arms Survey attended the workshop.

The participants presented the regulations applicable in their respective countries regarding the control and deactivation of firearms, the current procedures and particularities, the problems experienced, the databases used, significant cases involving deactivated/reactivated firearms, challenges and suggestions of improvements, good practices, technical issues and research works related to the topic.

During the workshop the SELEC Associated Firearms Experts Network (SAFE-N) was presented, a network that is being created under Project SIRAS in order to provide a pool of experts and a platform for direct exchanges among professionals from various fields and environments related to firearms.
Project SIRAS aims at strengthening the capacities of the law enforcement agencies in South-East Europe in fighting firearms trafficking. The project envisages to support the use in the EU Member States and the SELEC Member Countries of data collection/analytic capabilities regarding firearms and to strengthen the investigation capacity, as well as joint investigations, police cooperation and standardization between law enforcement authorities in the region.

This project is funded by
the European Union.

This communication reflects only SELEC’s view and the European Commission is not responsible for any use that may be made of the information it contains.