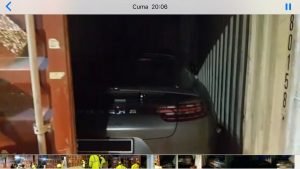 On December 14th 2017, the Bulgarian and Turkish law enforcement authorities initiated joint investigation codenamed “Panamera” in order to recover a luxurious vehicle evaluated at 400,000 Euro, that was stolen from Republic of Bulgaria and was declared wanted in the Interpol system. The vehicle was located through GPS, the coordinates showing that the vehicle is located in Istanbul/Republic of Turkey, in the harbor area. The Bulgarian Chief Directorate of the National Police and insurance company’s representatives were deployed to Istanbul to support the Turkish Police and Turkish Customs in this investigation. The next day, using a special locating device, the vehicle was discovered in a container, prepared for departure, with changed car plate numbers. The whole operation finished in less than 24 hours, as SELEC channel of information exchange was used in real time, constantly, through the Liaison Officers of the countries involved. Currently, the procedures are ongoing.