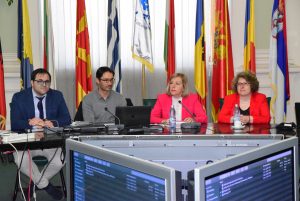 The Cybercrime Program Office of the Council of Europe and the Southeast European Law Enforcement Center (SELEC) organized the kick-off meeting for updating the curricula of the European Cybercrime Training and Education Group (ECTEG), Training on Darkweb and virtual currencies investigations, under the EMPACT OAP 2019.

The kick-off meeting took place in the period 11-13 March 2019 at SELEC’s Headquarters in Bucharest, Romania and gathered 15 law enforcement officers from Austria, Belgium, Spain and Norway, as well as representatives from Council of Europe, Europol, Interpol and UNODC.

The Director General of SELEC, Ms. Snejana Maleeva, welcomed the participants and briefed about SELEC mission and area of expertise, mentioning that one of the key priorities provided by 2018 Organized Crime Threat Assessment (OCTA SEE) developed by SELEC is fighting cybercrime, a continuously growing global phenomenon. During her intervention, Mrs. Maleeva also emphasized the importance of international cooperation and joint trainings in ensuring the effective and successful fight against cybercrime.

The meeting focused on the update and upgrade of the existing training package on Darkweb and virtual currencies investigations that will be used for the upcoming pilot trainings.