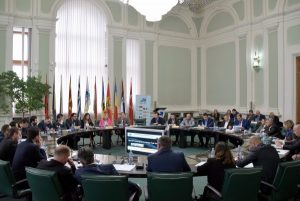 The 25th meeting of the Task Force on Countering Trafficking in Human Beings and Illegal Migration was held on 24th October 2018, at the SELEC premises in Bucharest/Romania, with the participation of law enforcement experts in the field from SELEC Member States, representatives of the partners (Belarus, IOM, Italy, Spain, Ukraine and USA) and of the private sector.

Opening remarks were addressed by Mrs. Snejana Maleeva, Director General, who underlined the importance of international cooperation in cases of trafficking in human beings and smuggling of migrants, pointing out at the same time the successful joint investigations conducted by the Member States with the support of SELEC.

During the meeting, the key findings of the SELEC Report on Trafficking in Human Beings and the Report on Smuggling of Migrants were presented.

Presentations regarding new trends and modus operandi, best practices and successful joint investigations targeting organized crime groups engaged in trafficking in human beings and smuggling of migrants were delivered by the experts, representatives of the SELEC Member States.

The Task Force on Countering Trafficking in Human Beings and Illegal Migration was established in May 2000, being coordinated by Romania.