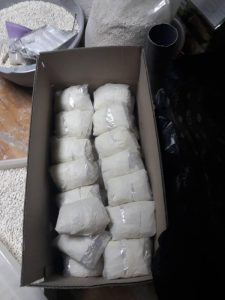 On 30 November 2017, the competent authorities of The former Yugoslav Republic of Macedonia and Republic of Serbia dismantled an international organized crime group involved in the production, trade and transport of synthetic drugs, as well as illegal trafficking in precursors, with final destination Republic of Turkey and probably Middle East. The exchange of information in this case was done through SELEC channel, which also supported several operational meetings between the involved case officers.

During the searches that were carried out in Tetovo/The former Yugoslav Republic of Macedonia, the Police found a laboratory with sophisticated equipment for illicit production of synthetic drugs, a large quantity of pills and other raw materials, as well as a gun, two pistols and ammunition being seized.The following day, the Police performed two additional searches in the area of Skopje during which other equipment (machines) was found, as well as 64 pills, 98 bags with powder substance, one pistol and ammunition.

Following the forensics examination it was determined that the active component is Amphetamine, the pills being marked as “Kaptagon“.

The total amount of different substances seized is to be determined, until now 204,696 pills and 67 packs with a net weight of 35044 gr. were examined.

At the same time, within the coordinated joint action, in Republic of Serbia another illegal laboratory was found where the members of the organized crime group produced synthetic drugs, which were subsequently smuggled in The former Yugoslav Republic of Macedonia to be processed as pills.

The illegal laboratory discovered in Tetovo is one of the biggest laboratories for illegal production of precursors and synthetic drugs discovered lately in South East Europe.

7 members of the organized crime group were detained for committing the offences of “Unauthorized production and release for trade of narcotics, psychotropic substances and precursors’’. The judicial procedures are ongoing.